Let’s say that you are the medic in a search party looking for someone who has been lost for several hours in upstate New York’s less-than-forgiving winter. Let’s go one step further and say that you find them, and they’re cold. What tools do you have to deal with the temperature issues? Throw a traumatic injury in, or extend the discussion to victims of trauma in general. While the role of hypothermia in mortality from traumatic injury is not fully understood, the avoidance of the “trauma triad” of acidosis, coagulopathy, and hypothermia remains a goal of prehospital trauma management. While covering the patient with a blanket and rapid extrication to a warm ambulance may suffice for short transport times in an urban system, it falls short in remote or austere settings. Traditionally, options have been limited. When we need warm fluids, our best option may be reaching for the bag of saline we’ve left hanging in front of a heating vent. While heating a bag of fluid in front of a vent is a creative solution, there is no way of telling how warm the fluids are, and no way to keep them warm as they travel down the lengthy administration set. All too often, providers administer large volumes of fluid to a patient not healthy enough to regulate the added volume, and hypothermia results.

Fortunately, and certainly due in part to military medicine and the recognition of hypothermia as a fourth preventable cause of combat-associated death, some options have emerged. One approach is the warming of intravenous fluid. The most specific fluid warmer to the EMS mission is the Thermal Angel. In response to the known problems with thermal regulation in sick patients, a flight paramedic from Dallas, Texas developed the Thermal Angel blood and fluid warmer, marketed by Estill Medical Technologies. Its relatively small size and simplicity make it an easy selection for prehospital providers. The parts included are the Thermal Angel module, a power cord, a battery, a charging cord and… that’s it. It’s quick and easy to set up and works with standard IV administration and extension sets. The Thermal Angel training video advertises that it “will strive to achieve” 38° Celsius (+/- 3°) at a rate of up to 9 liters/hour, given fluid input temp of 20° C (68° F, room temperature). We’re not able to find any direct claims that it will in fact accomplish this degree of fluid warming, and it’s only fair to point out that room temperature fluid is not always available in remote settings–or even on the ambulance. If your mission requires the portability offered by this device’s battery, however, it’s the only game in town at the moment. 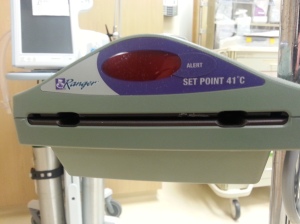 A less portable option is the Ranger Blood and Fluid Warming System produced by Arizant Healthcare. Arizant is the same company that makes the Bair Hugger warming blankets. Much like the Thermal Angel the Ranger can also provide dry fluid warming, and claims to heat fluids to appropriate temperatures up to 41C. The Ranger claims to provide warm fluid at rates up to 30 liters/hour. While it is relatively compact and easy to use, the Ranger uses proprietary administration lines. It also lacks any type of battery power, requiring an AC outlet power. This makes the Ranger a viable alternative for vehicle borne use, but precludes field deployment.

While there are other fluid warming devices on the market, these two are the only ones currently suited in any capacity to the transport environment.

In another approach to hypothermia management, thermal blanket products represent a protective option vs. the corrective action of the fluid warmers. These products are generally more portable and less expensive than the fluid warmers, making them well suited to prehospital or transport roles. The simplest and most compact of these is of course the reflective survival blanket, which may be the most appropriate form of hypothermia prevention for applications where space is extremely limited (such as the tactical medic’s aid bag). 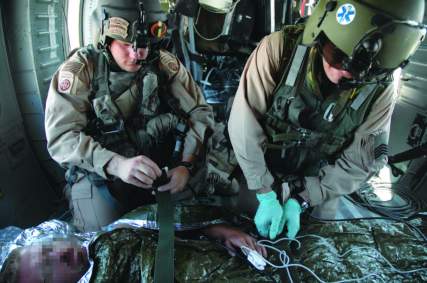 The Blizzard Blanket from Blizzard Survival is a simple blanket made from a cellular material that allows it to trap heat. In this respect it offers superior insulation capability to single-ply survival blankets, while at the same time being larger. The Blizzard Blanket is recommended in the PHTLS guidelines and used by military and EMS systems worldwide. The packed size is approximately 8″x4.5″x2″ and 1.2 pounds.

A second option for hypothermia protection is the Hypothermia Prevention and Management Kit offered by North American Rescue. This is a shell/liner system which utilizes a self-heating liner. NAR claims six hours of continuous heat “to 106°F.” Note again that this marketing terminology, as in the case of the Thermal Angel, makes no guarantee of efficacy. This system is another step up in size from the Blizzard Blanket at 6.75″x10.5″x5.5″ and 3.5 pounds–the kit is pack-portable, but we’ve found it consumes a lot of space in the pack. We were unable to find any peer-reviewed data on this system.

In a 2005 study published in Military Medicine, the Ranger was compared against the Thermal Angel. Two other devices were included in the study, though we do not discuss them here due to their impracticality for our purposes. In this study the Thermal Angel and the Ranger were tasked with warming packed red cells, hextend, and lactated ringers. All fluids were administered with a starting temperature of 4-7°C (39-45°F), while hextend and LR were also tested starting at 20°C (68°F). The Ranger acceptably warmed all tested fluids, while the Thermal Angel warmed all except cold LR:

The clinical standard is to have fluids warmed to 32 degrees C at a minimum and more preferably to 34 degrees C to 35 degrees C. Of the fluid warmers tested, only the Thermal Angel failed to achieve such a temperature in warming cold LR.

Recall that the spec for the Thermal Angel calls for room temperature fluid. It is notable that the device warmed cold PRBC and hextend to clinically acceptable levels and only fell short with the cold LR. We don’t have any information regarding the use of saline, though we might reasonably expect that performance would be similar to LR.

No literature we’re aware of includes the NAR HPRK.

The Thermal Angel and Blizzard Blanket are the devices of choice when portability is the most important metric, whereas the Ranger and NRPK provide more definitive warming options at the expense of portability. The take home point is that regardless of your mission profile, we currently have effective hypothermia prevention and treatment options for the transport medicine and austere environments.